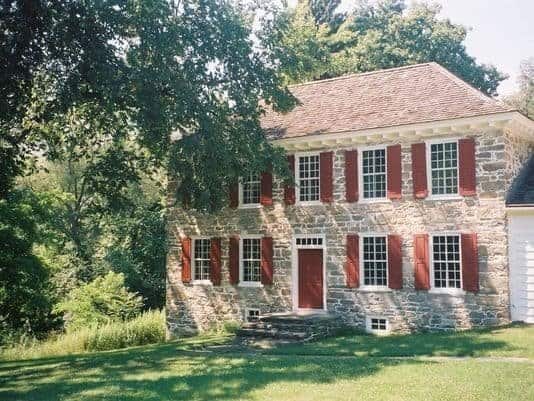 The two-and-a-half story stone house that sits along Forge Hill Road, just southeast of its intersection with Blooming Grove Turnpike (Route 94), in Vails Gate, Orange County was built in 1754 as a “country retreat” for businessman Thomas Ellison. His primary residence was located at Plum Point, New Windsor where he operated a successful trade enterprise from his dock along the Hudson River.

The stone house was built by John Bull, a local mason. The main five-bay house features walls made of coursed fieldstone two feet thick. A one-story frame wing was added to the east side of the structure in 1799.

About 10 years after it was built, Ellison’s son John got married and the house was gifted to the newlyweds. His father also granted John oversight of the property’s grist mill, which the elder Ellison established in 1740. The flour produced there was shipped to merchants in New York City on Ellison’s sloops.

In 1779, Continental Army Gen. Henry Knox occupied the house for the first of four stays during the Revolutionary War. Located in the Hudson Highlands where major ferry routes connected the region with New England and points south, its vantage point was critical to the patriots’ cause.

One mile east of the Ellison house was the New Windsor Cantonment and Gen. George Washington maintained his headquarters at the Hasbrouck house in nearby Newburgh.

“While John Ellison did what was required of him when the Continental Army sought use of his house, his family was divided because they were married into the Colden family,” said Knox Headquarters Site Manager Michael McGurdy. “Cadwallader Colden was the Royal lieutenant governor of New York and they had many prominent family members who were loyalists.”

When Knox left Ellison’s house in 1782 to assume command over the fortifications at West Point, Gen. Horatio Gates lived there while he oversaw the troops at the New Windsor Cantonment.

Despite the awkward position the Ellison family faced given their loyalist ties, they remained in the house during the Continental Army’s occupancy, primarily staying in the master bedchamber. In fact, documentation supports the fact that Ellison’s wife apparently enjoyed having guests in the house, particularly when Gen. Knox’s wife Lucy visited with her children on occasion. The Ellison’s did not have children.

Following the war, the house was under a series of subsequent owners that included its use as a boarding house during one period. The home fell into a deteriorated state. In 1917, the Knox Social and Protective Association was established to attempt to save the property.

In 1922, the state Legislature accepted the house and grounds as a gift from the association. Undergoing a painstaking, expensive and lengthily restoration process, the house was finally revived to its former state in 1954.

Following Knox’s tenure at West Point, in 1785 he was appointed the United States’ first secretary of War, a position he held until his retirement in 1794.

Today, along with the historic house, the property still features remnants of the mill foundation, giant wheel pit and stone tunnel that channeled water from the upper part of the stream.

“Visitors like to hear the personal stories of the people that stayed here,” said Knox Headquarters on-site administrator Karen Pena. “We still have a lot of letters from the Knox family as well as military and civilian people that occupied the property.

“Guests like to hear their voices and what they talked about while they were here,” she said.

PUBLIC TOURS
Knox Headquarters is open for public tours from Memorial Day to Labor Day, Wednesdays through Sundays.
For more information call the site at 845-561-5498.
It is located at 289 Forge Hill Road, Vails Gate.

“Dateline” appears Wednesdays in the Poughkeepsie Journal. To suggest a topic, email Anthony Musso at railcommute@gmail.com

In addition to government service Anthony worked as a freelance correspondent for the Times-Herald Record in Middletown, New York and later as a journalist and weekly columnist with Gannett Newspapers, a position he still maintains. His first book, "FDR and the Post Office" was released in 2005 and was followed by a two-volume book, " Setting the Record Straight; the music and careers of recording artist from the 1950's and 1960's. His next books, "Hidden Treasures of the Hudson Valley", feature sites throughout the upstate New York region that, while not widely known boast significant ties to, among other things the American Revolution, early American industry and local and national politics.
All Posts »
PrevPreviousSinatra, Fitzgerald some of the stars that lit up Newburgh’s Broadway
NextSteam mill built Newburgh’s industrial ageNext