Sinatra, Fitzgerald some of the stars that lit up Newburgh’s Broadway 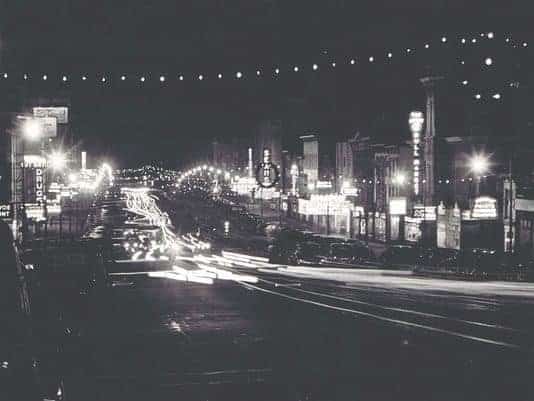 When most people think about Broadway’s theater district, they focus on Manhattan. Beginning in the late 19th century, along another Broadway, in the City of Newburgh, world-class performers, and later, Hollywood motion pictures, were featured at no less than eight theaters that operated there.

Railroad service arrived in the Hudson Valley during the mid-19th century and folks residing east of the Hudson River accessed the Newburgh theater district from the Beacon train station, and a short jaunt across the river by ferry. People west of the river departed the West Shore Railroad Station in Newburgh, just blocks from the theaters.

“The first venue to open was the Newburgh Opera House, which featured vaudeville and legitimate theater,” City of Newburgh Historian Mary McTamaney said. “Located at today’s library entrance, it was built as a church and then converted to a big public hall in the 1860s.”

In 1888, the Academy of Music, a concert hall/playhouse, opened at 82 Broadway. Upon transforming to a movie house, its name changed to Academy Theatre. A fire destroyed the Academy in February, 1956 and the building was subsequently demolished.

The Clinton Theater opened in 1910, along Colden Street near Clinton Square. Starting as a nickelodeon in a converted storefront, it later screened silent films, but closed down prior to 1920.

Newburgh’s Imperial Theatre opened around 1912 at 13 Colden St., north of Broadway. A venue that also began as a nickelodeon, it was overseen by Jacob Genter, who invented a reflective screen fabric that could show motion pictures in a well-lit environment. It later became the Bon Ton Theatre under a new owner.

Considered the grandest theater in Newburgh was Cohen’s Opera House, at 107 Broadway. Opened in 1914, it staged vaudeville shows until 1933, when a new owner refurbished its interior with lavish décor and big-name entertainers, such as Ella Fitzgerald and Red Skelton, performed in the renamed Ritz Theater.

Frank Sinatra took the stage with the Tommy Dorsey Orchestra in 1940, and the following year the Ritz hosted the stage debut of a young and nervous Lucille Ball.

Converted into a first-run movie house, the Ritz closed in 1981, was reopened as a four-screen discount movie house in 1999, but closed again after four months, reporting dismal ticket sales. In 2002, the theater was acquired by Safe Harbors of the Hudson, an organization that is determined to restore the legendary showplace.

“We were able to restore the lobby of the last historic theater in the City of Newburgh and offer an amazing schedule of world-class musicians that perform in that space while we work to re-create the large-scale performance space inside the theater,” said Lisa Silverstone, Safe Harbor’s executive director. “People coming out to support the lobby performances will help us build our base for restoring the bigger theater.”

The Broadway Theatre opened in 1914 at 131 Broadway and was eventually managed by United Paramount Theaters. Damaged by fire in the 1940s, it was restored only to suffer complete destruction by a second fire in 1965.

“The Broadway Theatre burned down while it was showing the Beatles movie ‘Help,’ ” McTamaney said. “There is a back page photo in Life magazine that shows the flames leaping out above the marquee with the movie title ‘Help’ displayed.”

The Royal Theater, at 117 Broadway, shared the same block as the Ritz and the Broadway Theatre. It was renamed the Cameo Theatre, known for its double-feature movies, but closed during an early 1930s expansion of the Sears and Roebuck store next door.

While all but the Ritz Theater are now gone, Newburgh boasts a newer entertainment venue, the Downing Film Center, which specializes in independent, foreign and classic films, at 19 Front St..

In addition to government service Anthony worked as a freelance correspondent for the Times-Herald Record in Middletown, New York and later as a journalist and weekly columnist with Gannett Newspapers, a position he still maintains. His first book, "FDR and the Post Office" was released in 2005 and was followed by a two-volume book, " Setting the Record Straight; the music and careers of recording artist from the 1950's and 1960's. His next books, "Hidden Treasures of the Hudson Valley", feature sites throughout the upstate New York region that, while not widely known boast significant ties to, among other things the American Revolution, early American industry and local and national politics.
All Posts »
PrevPreviousNew Windsor Cantonment
NextKnox Headquarters gives look at Revolutionary WarNext