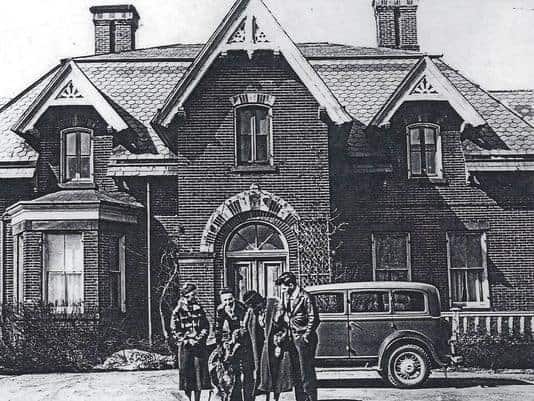 In 1867, Newburgh attorney John Monell hired renowned architect Frederick Clarke Withers to build his mansion on 5 acres in the northwest corner of Fishkill Landing (today’s City of Beacon). Designed in a High Victorian Gothic architectural style, it served as a homestead for Monell and his new bride, Caroline DeWindt Downing.

The land was part of a 2,000-acre parcel that was gifted to Caroline’s father, John Peter DeWindt, during the early 19th century from his father. The elder DeWindt immigrated to the United States from Eustatia, a small island in the British Virgin Islands; Monell named his brick dwelling after that island.

“John Peter DeWindt lived at “The Cedars” estate that overlooked the river on Tompkins Avenue,” said Robert Murphy, president of the Beacon Historical Society. “It was destroyed by fire in 1862 and DeWindt died in 1870.”

He was responsible for much of Fishkill Landing’s river commerce. DeWindt constructed Long Dock in 1815 and operated a shipyard just south of it.

On July 28, 1852, while traveling along the Hudson River aboard the steamship Henry Clay, Downing was one of 500 passengers on the vessel when a fire in the engine room spread quickly. Despite the captain’s expeditious action getting the vessel back to shore in Riverdale to allow passengers to escape, Downing and his mother-in-law perished in the incident. He was 36 years old.

Nearly 15 years passed when Caroline Downing married John Monell and their new home was erected two years later in Beacon. Overlooking the Hudson River and boasting beautiful gardens, Eustatia became one of the most enviable estates in the region.

Monell’s connections to both Andrew Jackson Downing and Frederick Clarke Withers began in Newburgh; Monell and his first wife socialized with the Downings and Withers also designed Monell’s impressive mansion in that city. It was through the efforts of Monell and Downing that the Newburgh Library was established.

Withers immigrated to the United States from England in 1851 to work with Downing – and Calvert Vaux. Following Downing’s untimely death, Vaux and Withers continued to work on projects and books using Downing’s influence and designs to guide them.

The design Withers used for Eustatia can be found in the 1873 Downing book, “Cottage Residences,” a work that was obviously added to by Vaux and Withers after the author’s demise. The 1.5-story, 3-bay Beacon dwelling featured an L-shaped design with a projecting 2-story central gable roof portico.

It features three sets of paired chimneys – two in the central block and a third in the L-shaped portion. A veranda was added along the structure’s west side and a set of double chestnut doors sit at the house’s main entrance; a stone inscribed with the initials “J C M” – for John and Caroline Monell – along with the date (1867) was installed there.

“The November 23, 1901 edition of the Fishkill Standard newspaper reported that John Peter Dewindt’s son Arthur’s homestead on North Avenue (Route 9D) — including 50 acres of land — was purchased by a syndicate of local men to be turned into a clubhouse,” said Beacon’s Ian McDonald Sr. “A year later, the Southern Dutchess Country Club opened.”

Monell, a graduate of Union College in 1833, returned to his hometown Newburgh to practice law. He was later appointed a judge and thereafter was always referred to as Judge Monell. His second wife, Caroline, grew up in Fishkill Landing and was the great granddaughter of President John Adams.

Monell passed away in 1885 and Caroline died in 1905. They are both interred in Cedar Hill Cemetery, Newburgh; however Caroline is buried with her first husband.

Eustatia is at 12 Monell Place, Beacon.

In addition to government service Anthony worked as a freelance correspondent for the Times-Herald Record in Middletown, New York and later as a journalist and weekly columnist with Gannett Newspapers, a position he still maintains. His first book, "FDR and the Post Office" was released in 2005 and was followed by a two-volume book, " Setting the Record Straight; the music and careers of recording artist from the 1950's and 1960's. His next books, "Hidden Treasures of the Hudson Valley", feature sites throughout the upstate New York region that, while not widely known boast significant ties to, among other things the American Revolution, early American industry and local and national politics.
All Posts »
PrevPreviousNewburgh’s Lake View House a fine example of lake resort
NextPowelton Club golf course a classic design even todayNext