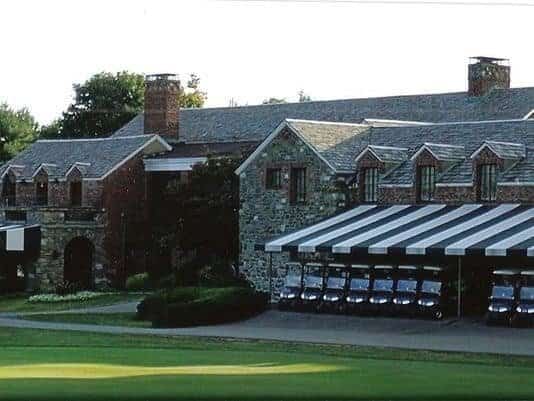 Located on the east side of Route 9W just north of Interstate-84 in Balmville, a hamlet in the Town of Newburgh, the Powelton Club is a prestigious golf and country club. Prior to its establishment in 1882, the property was a private estate, housed the Newburgh Female Seminary and became Powelton House, a luxury hotel and resort that succumbed to a massive fire.

“The name of the club originated because of Thomas Powell, a Welsh businessman who immigrated to the Hudson Valley,” City of Newburgh Historian Mary McTamaney said. “His ancestors owned a large estate in Wales named Powelton and he named his estate in Newburgh after his grandfather’s estate in Wales.

“Powell engaged in river activity and owned steamboats,” she said. “He married Mary Ludlow and they had a daughter named Mary. One of Thomas Powell’s most famous and beautiful steamboats was named for the young girl.”

In the 1830s, Thomas Powell built a school complex of brick buildings on his property to ensure that his daughter was well educated. Mary Powell eventually married Homer Ramsdell, a successful businessman who succeeded Thomas Powell in the family transportation business, owned the Newburgh-Beacon ferry, was president of the Erie Railroad and operated a number of other local industrial enterprises.

In 1878, the Powelton Archery Club was founded on the property and after acquiring additional land for the expansive Powelton Farm, Ramsdell established the Powelton Lawn Tennis Club of Newburgh in March 1882. That same year, the United States Lawn Tennis Association was founded and the Newburgh club became one of 33 chartered members of the national organization.

By the end of its first year of operation, the Powelton Club boasted 160 members. The grounds featured a summer house, two tennis courts and an innovative windmill system, which was utilized to water the courts. In April 1892, the club received its charter and seal of incorporation, and its board of directors signed a five-year lease with Ramsdell, who died two years later.

The lease required an 11-member board to oversee the club’s operation, with its members elected at an annual meeting. The board was responsible for electing an executive committee from among the club members in good standing. Shortly after its incorporation, the board proposed the construction of a clubhouse on the grounds to include a dance hall, bowling alleys and dressing rooms for men and women members.

Members were assessed annual dues of $10 for men and $5 for women.

As the sport of golf’s popularity grew, the Powelton Club responded by creating a nine-hole course the following year and its first handicap golf tournament was held in November 1895. In 1899, the club was one of the first to join the Metropolitan Golf Association. Within the next decade and having associated itself with the United States Golf Association in 1915, the Powelton Club hired George Merritt as its resident golf professional.

Annual dues increased toward the close of that decade to $75 for men and $50 for women, and the remainder of the Ramsdell property was acquired for $32,000. In 1921, the club hired world renowned golf course architect Devereux Emmet to design a new 18-hole course at Powelton; it opened in May 1926.

In November 1929, the clubhouse was destroyed by fire, but club officials quickly oversaw the construction of a new brick structure that opened the following August. Its Emmet-designed golf course design remains primarily intact today.

“When Interstate-84 was built they took a little bit of land from the Powelton Club and we had to change a couple of tees around on our back nine, but other than that the course has remained the same,” said General Manager Chris Diesing.

Now in its 133rd year, the Powelton Club has the distinction of being one of the five oldest golf courses in New York and 10th oldest in the country. It is at 29 Balmville Road, Newburgh.

In addition to government service Anthony worked as a freelance correspondent for the Times-Herald Record in Middletown, New York and later as a journalist and weekly columnist with Gannett Newspapers, a position he still maintains. His first book, "FDR and the Post Office" was released in 2005 and was followed by a two-volume book, " Setting the Record Straight; the music and careers of recording artist from the 1950's and 1960's. His next books, "Hidden Treasures of the Hudson Valley", feature sites throughout the upstate New York region that, while not widely known boast significant ties to, among other things the American Revolution, early American industry and local and national politics.
All Posts »
PrevPreviousBeacon’s stately Eustatia named after British Virgin island
NextTower of Victory survived terrible weatherNext