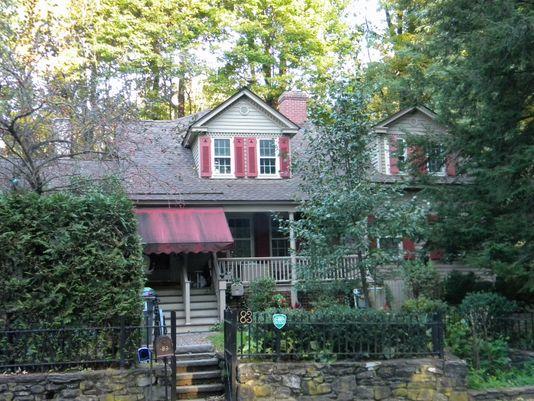 On the west side of Balmville Road in the Newburgh hamlet of Balmville is a mid-18th-century structure known as the Bloomer-Dailey house.

It sits just west of where the Balmville Tree, a cottonwood that, through scientific studies, was dated to 1699, once stood; It was cut down in 2015 due to severe deterioration and potential danger to passing traffic.

The story of the Balmville community and house began in 1684 when British Royal Navy Capt. John Evans received a land grant in the area from Col. Benjamin Fletcher, then governor of the providence. The grant was later annulled by the Earl of Bellotroni during his administration.

During the winter of 1709, 54 Palatines who came to the New World on British ships settled on the land. Evans waged a 1711 appeal to restore his land patent while the Palatines petitioned Queen Anne of England for the same property. In 1714, the Palatines were granted 2,190 acres in what today consists of the city of Newburgh.

In 1786, the Balmville tract was deeded to five individuals, one being William Bloomer, who’d lived and operated a blacksmith shop in the mid-18th-century dwelling prior to the American Revolution. While the shop was located in the house, Bloomer’s forge was said to exist on a small parcel across the road, near the Balmville Tree and where St. Agnes Chapel (now a private residence) stands today.

The hamlet was named after the tree, which was thought to be of the “Balm of Gilead” species.

“Bloomer is an old name in Balmville and that area was a pretty busy crossroads hamlet in the 18th century,” said Newburgh city historian Mary McTamaney. “At one time Balmville, the city of Newburgh and New Windsor were comparable to each other with three separate docks and transit coming and going.”

The original section of the house is its three- by two-bay, one-and-a-half-story center block; Additions were subsequently built onto both its north and south sides during the 19th and 20th centuries. The three sections all feature a clapboard exterior and are covered with shingle-clad gable roofs.

Following Bloomer’s residency in the house, the Corwin family acquired it and, in 1825, Elizabeth Corwin married Archibald Dailey there. The house eventually passed on to the couple and they raised their children there.

When he purchased the house from the Corwins, Archibald Dailey held fishing rights to the northern half of Newburgh Bay and operated Dailey’s Wharf, a prosperous enterprise. From the porch of the old house Dailey was able to keep a watchful eye on his operation below.

By 1914, John Staples had acquired the house and began to renovate and upgrade it in an attempt to recapture its vintage architecture and historic value in the hamlet. He is responsible for having transformed a 19th-century outbuilding that sits north of the house into a Colonial Revival-style garage.

The single-story, two- by one-bay wing that was added to the north side of the central block was built in 1932 by owner Augustus W. Bennet, who served as a member of the 79th Congress, from 1945-47.

After graduating from Columbia University Law School in New York City in 1921 and being admitted to the bar later that year, Bennet opened a law practice in Newburgh. The house has passed through several owners to date and maintains its historic character in the hamlet.

“I purchased the house in 1974 and there are three exposed beams in the center block,” said retired journalist Richard Severo. “In the backyard someone created sort of a cave where they used to store food.”

In 2000, John Bonafide completed the necessary paperwork for the house and Balmville Tree’s inclusion on the National Register of Historic places. It is at 83 Balmville Road.

“Dateline” appears Wednesdays in the Poughkeepsie Journal. To suggest a topic, email Anthony Musso at railcommute@gmail.com.

In addition to government service Anthony worked as a freelance correspondent for the Times-Herald Record in Middletown, New York and later as a journalist and weekly columnist with Gannett Newspapers, a position he still maintains. His first book, "FDR and the Post Office" was released in 2005 and was followed by a two-volume book, " Setting the Record Straight; the music and careers of recording artist from the 1950's and 1960's. His next books, "Hidden Treasures of the Hudson Valley", feature sites throughout the upstate New York region that, while not widely known boast significant ties to, among other things the American Revolution, early American industry and local and national politics.
All Posts »
PrevPreviousTravel to Manhattan on posh steamboat Mary Powell was luxurious experience for passengers
NextNewburgh, NY: The Cradle of the American Lawn Mower Industry – by Miquel J. HernandezNext