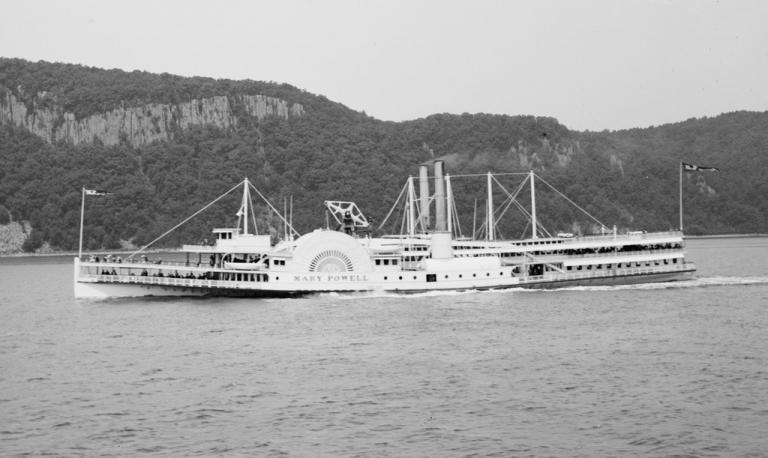 The Mary Powell steamboat  was built in 1861 at Allison’s Shipyard in Jersey City, New Jersey for a reported $80,000. Docked along Rondout Creek in the Village of Rondout (later to become part of the City of Kingston), it was the most luxurious and fastest vessel on the Hudson River for 55 years, making daily trips to and from Manhattan for a modest fee.

“Traveling on the Mary Powell was a pleasure trip and people got dressed up for it,” said Allynne Lange, curator of the Hudson River Maritime Museum in Kingston. “It had posh furnishings, a restaurant and in summer you experienced cool breezes and outstanding views.”

The steamboat was commissioned by Capt. Absalom Anderson. Along with his son A. Eltinge, who succeeded him as captain, they commanded the boat for a combined more than 40 years. The elder Anderson owned 50 percent of the steamboat, with partners Capt. John Ketcham and John L. Hasbrouck each owning 25 percent.

The vessel was named in honor of the widow of Thomas Powell, a prominent Newburgh businessman who owned various enterprises and operated a namesake steamboat of his own.

Spanning 267 feet and weighing 819 tons, the Mary Powell made regular stops in Poughkeepsie, New Hamburg, Milton, Newburgh, Cornwall, West Point and Highland Falls. In 1861, its first northbound test run from Manhattan to Rondout took five and a half hours.

At the start of that initial trip a reporter for the New York World newspaper on hand to witness the event dubbed the Mary Powell “Queen of the Hudson,” a nickname that stuck throughout its existence.

After spending the winter docked at Port Ewen, in spring 1862 the steamboat made its first southbound trip to have its bottom coppered and to load the finely crafted furniture that was purchased aboard. The interior walls of the steamboat were lined with paneling of polished wood.

Its operating season ran from mid-May through October and Absalom Anderson took great pride in Mary Powell’s appearance and its congenial onboard atmosphere. In fact, if a guest should dare to conduct themselves improperly, Anderson would personally escort them off the vessel at the next stop.

While the steamboat’s inaugural season was successful, Anderson was not satisfied with its speed. He returned it to the shipyard with instructions to cut it in two and elongated the vessel. The process, which extended its length to 288 feet, increased its speed to 22.4 miles per hour, with the ability to reach 25 miles per hour on short runs.

In 1882, Thomas Cornell purchased the Mary Powell from the elder Anderson, and Capt. John Brinckerhoff of Poughkeepsie subsequently acquired one-third of the company for $34,000. Brinckerhoff’s house on South Hamilton Street in the city features a front façade that resembles a ferry boat, similar to the one he operated between Highland and Poughkeepsie.

“The Brinckerhoff family was always investing in different business ventures,” said Millbrook’s David Brinkerhoff, a descendent of the family. “In 1883, John Brinckerhoff became the treasurer of the Mary Powell. The family bought and sold the steamboat a few times.”

Following the 1902 season, the Mary Powell was acquired by the Hudson River Day Line. Its service initially continued unchanged but by 1913 it was also used for charter excursions and trips to Albany. Her final run took place in September 1917 and in 1920 it was sold for scrap metal.

“They took the Mary Powell out of service because 55 years is a very long time for a wooden boat to be in operation,” Lange said. “The museum has some items saved from the steamboat.”

In all, the Mary Powell was overseen by 14 different owners and/or partnerships through the years.

“After the Mary Powell was taken out of service, A. Eltinge Anderson took over operating the Brinckerhoff Ferry between Highland and Poughkeepsie,” David Brinkerhoff said.

“Dateline” appears Wednesdays in the Poughkeepsie Journal. To suggest a topic, email Anthony Musso at railcommute@gmail.com

Reprinted with permission from the author.

In addition to government service Anthony worked as a freelance correspondent for the Times-Herald Record in Middletown, New York and later as a journalist and weekly columnist with Gannett Newspapers, a position he still maintains. His first book, "FDR and the Post Office" was released in 2005 and was followed by a two-volume book, " Setting the Record Straight; the music and careers of recording artist from the 1950's and 1960's. His next books, "Hidden Treasures of the Hudson Valley", feature sites throughout the upstate New York region that, while not widely known boast significant ties to, among other things the American Revolution, early American industry and local and national politics.
All Posts »
PrevPreviousFrom Merchant to Manufacturer: The Economics of Localism in Newburgh, New York, 1845-1900 (Part 2), by Mark C. Carnes
NextHistoric Bloomer-Dailey house had Balmville Tree as neighborNext