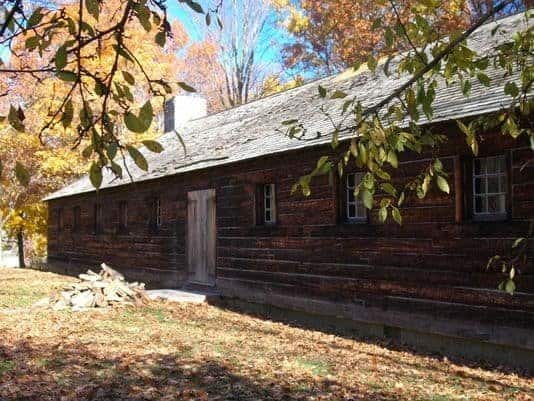 From October 1782 through June 1783, Gen. George Washington relocated 7,000 of his army troops to a 1,600-acre parcel of land at today’s 374 Temple Hill Road in New Windsor, Orange County. Upon arriving, they began to construct huts and auxiliary structures to support them during the winter months.

Washington’s motivation to create the winter cantonment was due to the Continental Army’s victory over the British in Yorktown, Virginia, the prior year. The site would become the army’s final winter encampment of the Revolutionary War.

Known as the New Windsor Cantonment, the site was 6 miles east of Washington’s headquarters in Newburgh. Approximately 600 log huts were built on the site and about 500 women and a number of children, primarily family members of some troops, also resided there.

Unlike typical tent encampments used by troops during the war, the log huts — which were lined up on the site by regiment in an orderly fashion — were more durable and spacious.

Maj. Gen. Horatio Gates was appointed commandant of the cantonment and was housed in a nearby private residence.

At the suggestion of a New Hampshire regiments’ chaplain, Washington approved the construction of a 100-foot by 30-foot building to serve as a chapel for Sunday services. Named the Temple of Virtue, the building was also used as a commissary, for officer functions and a place to hear court martial proceedings.

It was in this building that on March 15, 1783 Washington addressed troop concerns after an anonymous letter that was distributed aired various complaints and concerns among Continental Army officers with regard to back pay, pensions and land bounties. Rumors of potential mutiny worried Washington since the cause for independence would be in serious jeopardy.

In what is described as a tense meeting, the general calmly explained to his officers the extreme financial problems that Congress was attempting to remedy before it could address and adhere to the officer’s claims. With faith in their commander-in-chief, the officers disbursed, thereby ending the issue.

In April, the provisional peace treaty was announced, prompting Congress to release its “Proclamation of the Cessation of Hostilities” and enabling Washington to issue cease-fire orders. A copy of Congress’ proclamation was posted on the door of the Temple Building and in June 1783, the troops were furloughed home.

The log huts and surplus equipment that were used during the final encampment were sold to the public. Unfortunately, the Temple Building was hit by lightning and destroyed in June 1783.

Washington felt strongly about acknowledging the efforts and faithful service of three soldiers and created and presented to them what was then called the Badge of Merit. Following the American Revolution, the award was basically forgotten; that is until the 20th century when it resurfaced under a new name, the Purple Heart.

“During World War I, Gen. Pershing thought that they should bring back Washington’s Badge of Merit,” said Pete Bedrossian, program director for the National Purple Heart Hall of Honor, established on the New Windsor grounds in 2006. “While the idea was kind of lost during the 1920s, during the latter part of that decade interest picked up again.

“In February, 1932, Douglas McArthur signed an order creating what became the Purple Heart. That May, a ceremony was staged at the cantonment site and 137 enlisted men from World War I were awarded the medal.”

The Town of New Windsor purchased 167 acres that was once occupied by many of the former log huts and a museum was established there in 1965; the state continues to operate it.

“The most important part of people visiting the Hall of Honor is that they’ll be able to understand the sacrifice that we’ve gone through,” said Beacon’s Tony Lassiter, who was awarded a Purple Heart after being wounded in Vietnam on Aug. 25, 1969.

The National Purple Heart Hall of Honor is open year-round. For more information about it, visit www.thepurpleheart.com/visit-us/

In addition to government service Anthony worked as a freelance correspondent for the Times-Herald Record in Middletown, New York and later as a journalist and weekly columnist with Gannett Newspapers, a position he still maintains. His first book, "FDR and the Post Office" was released in 2005 and was followed by a two-volume book, " Setting the Record Straight; the music and careers of recording artist from the 1950's and 1960's. His next books, "Hidden Treasures of the Hudson Valley", feature sites throughout the upstate New York region that, while not widely known boast significant ties to, among other things the American Revolution, early American industry and local and national politics.
All Posts »
PrevPreviousTower of Victory survived terrible weather
NextSinatra, Fitzgerald some of the stars that lit up Newburgh’s BroadwayNext