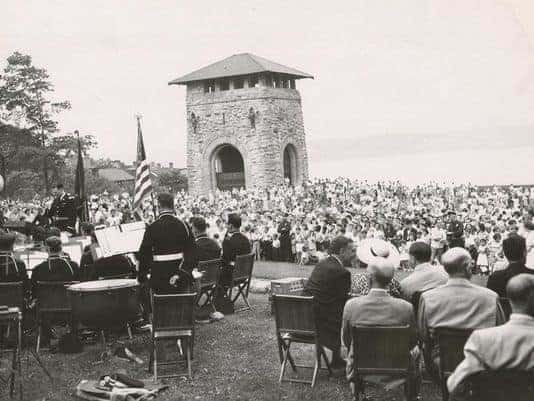 During the Revolutionary War, Gen. George Washington maintained his headquarters in Newburgh, Orange County, from April 1782 through August 1783. There, he oversaw the Continental Army, created and awarded the Badge of Military Merit (later to become the Purple Heart) and experienced many wartime achievements.

Despite being a successful celebration, there was one project at that time still in the planning stages — the construction of a peace monument on the grounds.

On April 23, 1883, Robert T. Lincoln, the first son of U.S. President Abraham Lincoln and his wife Mary — and at the time the nation’s secretary of war — stated, “It has been made my duty to cause to be erected at Newburgh, New York, a monument commemorative of the events, which took place there a century ago.”

A local committee was formed and they commissioned architect Maurice Power to draw a design for the monument. Power summoned another New York architect and artist John Hemenway Duncan to assist with the project. Duncan went on to achieve fame for his designs of the Soldiers and Sailors Memorial Arch in Brooklyn (1892) and Grant’s Tomb in Manhattan (1897).

The final design was in a Richardson Romanesque style and blended perfectly into its surrounding landscape. Named the Tower of Victory, the 37- by 32-foot, 53-foot high structure was comprised of native limestone and featured four large archways, which allowed access to an atrium in the center. Inside the atrium and perched upon a red granite pedestal sat a life-size bronze sculpture of Washington, created by sculptor William Rudolf O’Donovan.

Two spiral staircases in the atrium led to a belvedere, which provided visitors with outstanding views of the region. A view of Mount Beacon, where during the Revolutionary War fires were lit to signal approaching British vessels, sits straight ahead and across the Hudson River.

Surmounted by an iron tile roof to protect it from rain and sunshine, the roof was supported by 13 large limestone columns. Thousands of visitors visited the tower annually after its completion, which was accomplished in late 1887. It was clearly visible from the river below.

Four bronze statues of soldiers were added to the niches of the tower’s east and west elevations. Four finely detailed bronze gates were added to each arch to dissuade acts of vandalism and/or the unauthorized removal of tower artifacts.

In November 1950, hurricane winds damaged the tower’s tile roof and the state originally proposed the monument’s destruction. Outcry by local residents saved the structure. In 1953, a decision was made to remove the roof, which resulted in its present appearance.

“We just completed a $1.6 million capital campaign to restore the tower,” Historic Site Manager Elyse B. Goldberg said. “Over the last 60 years, it has been subjected to multiple terrible weather events, and it has sustained severe damage to the masonry and east gate, as well as having lost its belvedere and roof.”

Sue Smith and Matthew Shook of the Palisades Park Conservancy spearheaded the campaign to save the tower.

“There are monuments in Saratoga and other places along the East Coast that commemorate Revolutionary War battles, but the Tower of Victory was erected to celebrate the sort of peaceful ending of the war,” Shook said. “It was also built on the site where Washington stayed the longest during the war.

“Aside from that, the construction and artistic quality of the structure as originally built with its roof is very different from other monuments.”

The restoration is anticipated to be completed by the end of 2017. Washington’s Headquarters State Historic Site is at 84 Liberty St., Newburgh.

In addition to government service Anthony worked as a freelance correspondent for the Times-Herald Record in Middletown, New York and later as a journalist and weekly columnist with Gannett Newspapers, a position he still maintains. His first book, "FDR and the Post Office" was released in 2005 and was followed by a two-volume book, " Setting the Record Straight; the music and careers of recording artist from the 1950's and 1960's. His next books, "Hidden Treasures of the Hudson Valley", feature sites throughout the upstate New York region that, while not widely known boast significant ties to, among other things the American Revolution, early American industry and local and national politics.
All Posts »
PrevPreviousPowelton Club golf course a classic design even today
NextNew Windsor CantonmentNext